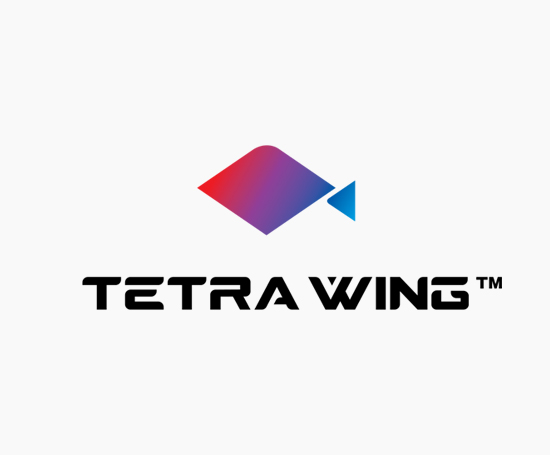 TETRA WING® is a total solution for enterprise clients to enable the next-wave of Microservice Architecture. Microservices offers greater enterprise agility, making it easier to change and develop new applications more quickly than in a traditional monolithic development approach. Organizaitons need both microservices and APIs to effectively implement the next-generation architectures.

TETRA WING® has a primary value of increased efficiency and that of reduced cost. The most direct way to measure and show productivity increase is through business process cycle time: how something that used to take days or weeks can now be completed in ten minutes with TETRA WING® integrated platform solution.

TETRA WING® is specifically targeted for Enterprise, Government, and Small & Medium Business Segments. In the majority of the customer environments, TETRA WING® plays an important role by providing High-Performance SLA over Millions of Transactions Per Second scalability. 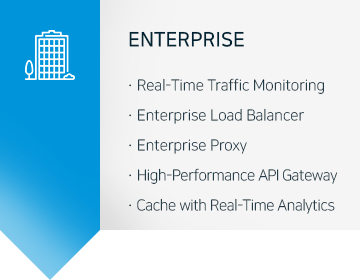 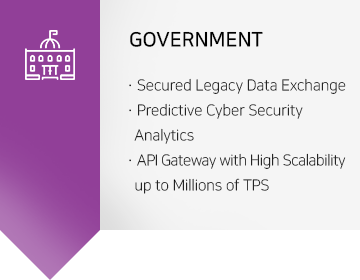 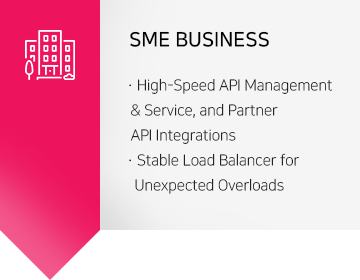 TETRA WING® value proposition is the integration capability with Enterprise Ecosystem and provides High Performance & Scalability. TETRA WING® can integrate and co-exist with existing all types of infrastructure including Enterprise Systems, Business Applications, and Internet of Things (IoT). 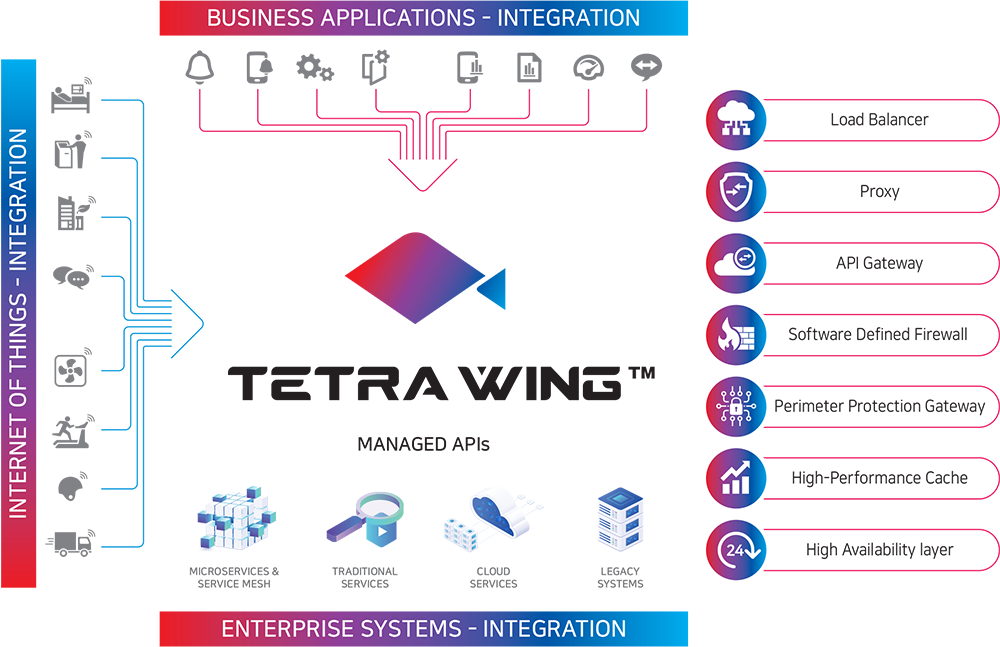 TETRA WING® is a solution platform in which hardware and software are all integrated. TETRA WING® Solution Platform is based on the next-generation container technology, and the complete technology stack is deployed as containers. 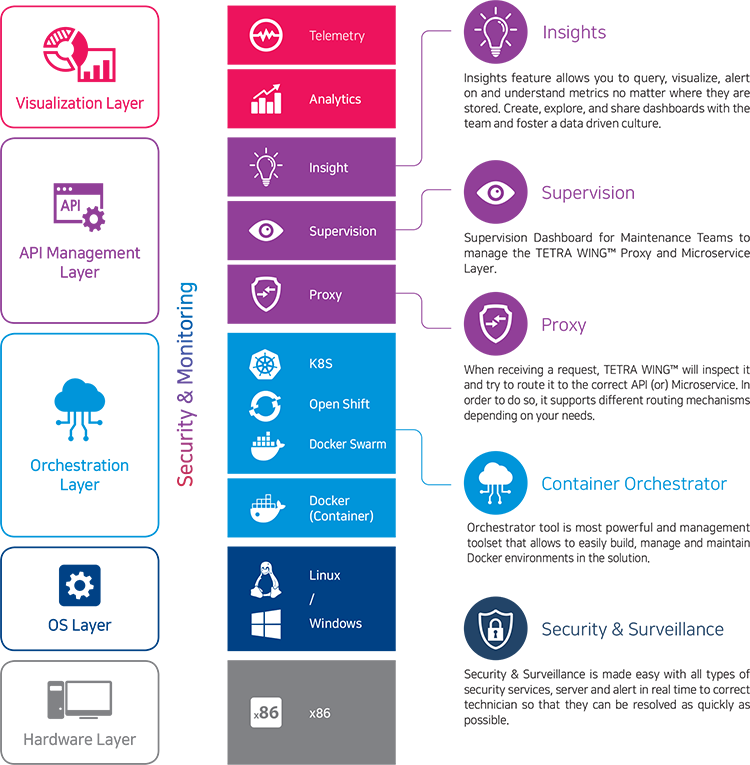 Containerized applications are not different. They do, however, carry an additional requirement: orchestration. At significant risk and expense, build a custom stack on physical hardware to try to fulfill your containerized apps’ requirements, or use proven, cost-effective, low-risk virtualization solutions as the underlying infrastructure for containers and their orchestration system. Containers, meanwhile, empower you to make developers more agile, applications more portable, and deployments more automatable. The combination of the two streamlines the development, deployment, and management of enterprise applications.

TETRA WING® Integrated Solution can be deployed in Enterprises (or) Government Agencies as below listed options. 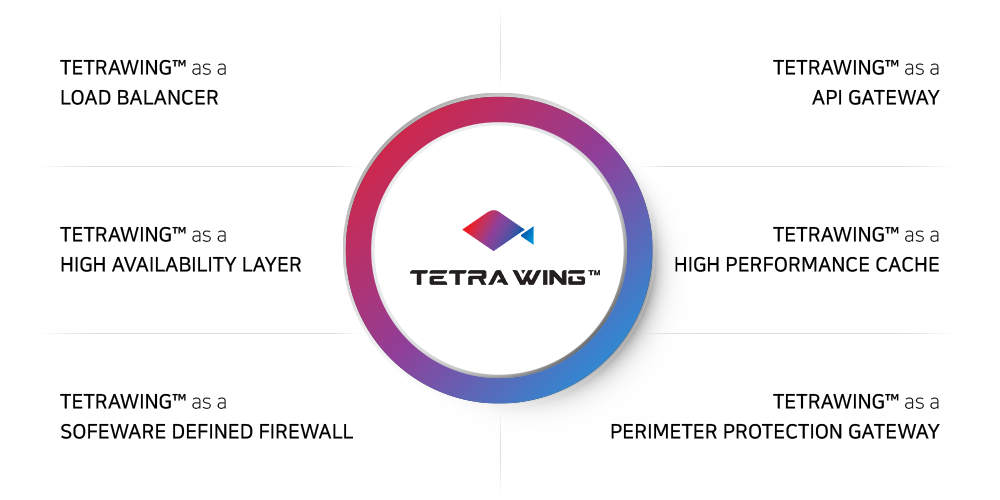 TETRA WING® Integrated solution is a load balancer that can scale up to 1,000,000 ( 1 Million ) TPS. TETRA WING® provides multiple ways of load balancing requests to multiple backend services: a straightforward DNS-based method, and a more dynamic ring-balancer that also allows for the service registry without needing a DNS server.

When receiving a request, TETRA WING® will inspect it and try to route it to the correct API (or) Microservice. In order to do so, it supports different routing mechanisms depending on your needs.

TETRA WING® is just that — a gateway for protecting APIs. Any time you create an API and make it publicly available. TETRA WING® resolves the problems by implementing industry standard encryption and authentications giving API developers a way to let people in and direct them to the right place.

TETRA WING® has capability to proxy and route raw TCP(Transmission Control Protocol) streams and deploy a service mesh sidecar pattern with mutual TLS between the nodes.

TETRA WING® uses an external data store to store its configuration such as registered APIs, Consumers and Plugins. Plugins themselves can store every bit of information they need to be persisted, for example rate-limiting data or Consumer credentials.

TETRA WING® very fast with sub-millisecond latency, runs on any infrastructure and is built on top of reliable technologies which provides High Availability by default. It has a rich plug-in ecosystem that allows it to offer many capabilities including proxy caching, rate limiting, access control and more.

TETRA WING® Integrated Solution is having web-based Operational Dashboard for easy maintaining, monitoring, analyzing and visualizing the solution in all areas of the solution. With the dashboard availability, anyone can navigate easily the respective sections of TETRA WING® as mentioned below. 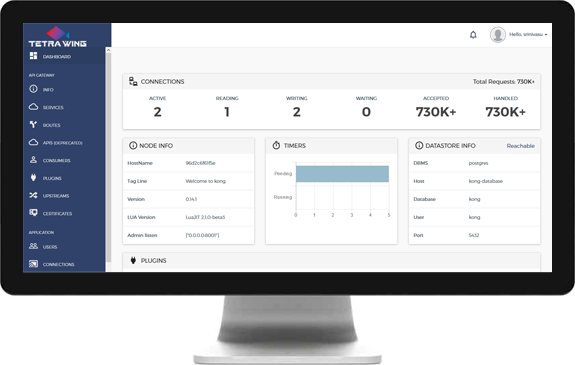 All the core entities such as Services, Routes, API, Consumers, Plugins, Upstreams, Credentials, and Add/Remove Functions are cached in memory by TETRA WING®. TETRA WING® Integrated Solution Insights feature allows users to query, visualize, alert on, and understand metrics no matter where they are stored. 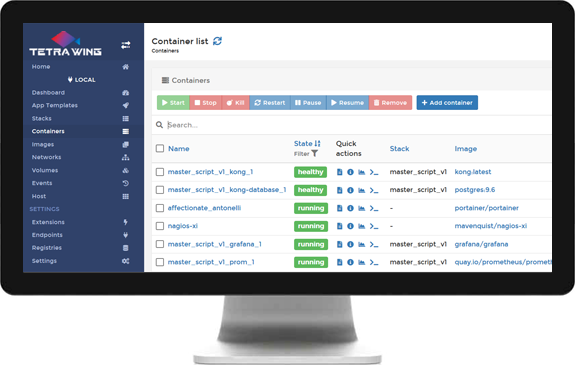 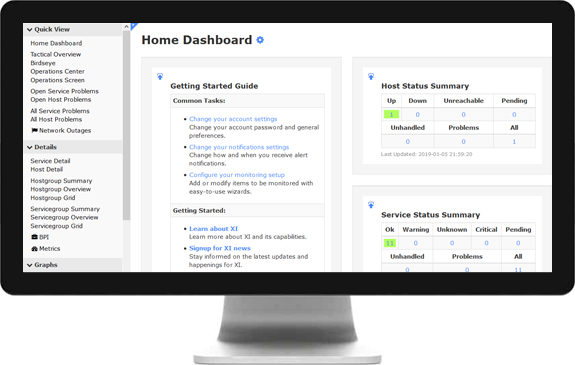 TETRA WING® Security & Surveillance is made easy with all types of security services, server, and alert in real time to correct technicians so that they can be resolved as quickly as possible.